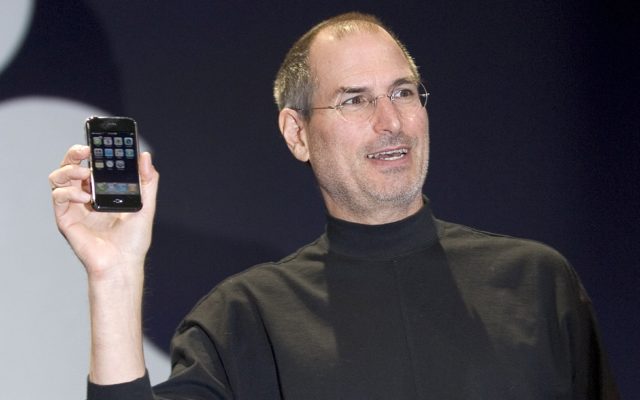 SAN FRANCISCO, CA - JANUARY 9: Apple CEO Steve Jobs holds up the new iPhone that was introduced at Macworld on January 9, 2007 in San Francisco, California. During the keynote Jobs introduced the new iPhone which will combine a mobile phone, a widescreen iPod with touch controls and a internet communications device with the ability to use email, web browsing, maps and searching. The iPhone will start shipping in the US in June 2007. (Photo by David Paul Morris/Getty Images)

The year was 2007, and the world had never even heard of an ‘iPhone’.  But Apple co-founder Steve Jobs knew how to get the media’s attention.

According to CNET‘s Roger Cheng, Jobs was showing off the original iPhone to a group of reporters when he suddenly chucked it across the room.

Reporters gasped as the phone hit the floor – but were impressed when Jobs picked the device up unscathed.

Cheng says the story shows “the kind of lengths Jobs went to in order to make an impression” – and wondered how “disastrous” it would have been for Apple if that phone had broken from Jobs’ toss.

What year did you get your first smartphone?  Would they have become popular so quickly without Jobs and the iPhone?