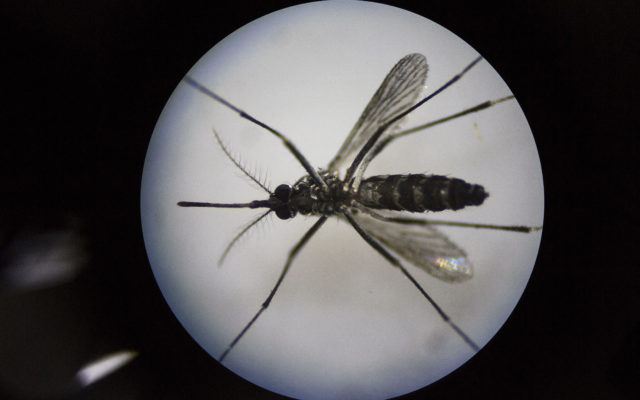 GUANGZHOU, CHINA - JUNE 21: An adult female mosquito is seen uder a microscope at the Sun Yat-Sen University-Michigan University Joint Center of Vector Control for Tropical Disease on June 21, 2016 in Guangzhou, China. Considered the world's largest mosquito factory, the laboratory raises millions of male mosquitos for research that could prove key to the race to prevent the spread of Zika virus. The lab's mosquitos are infected with a strain of Wolbachia pipientis, a common bacterium shown to inhibit Zika and related viruses including dengue fever. Researchers release the infected mosquitos at nearby Shazai island to mate with wild females who then inherit the Wolbachia bacterium which prevents the proper fertilization of her eggs. The results so far are hopeful: After a year of research and field trials on the island, the lab claims there is 99% suppression of the population of Aedes albopictus or Asia tiger mosquito, the type known to carry Zika virus. Researchers believe if their method proves successful, it could be applied on a wider scale to eradicate virus-carrying mosquitos in Zika-affected areas around the world. The project is an international non-profit collaboration lead by Professor Xi Zhiyong, director of the Sun Yat-Sen University-Michigan University Joint Center of Vector Control for Tropical Disease with support from various levels of China's government and other organizations. (Photo by Kevin Frayer/Getty Images)

Unlike their stinger-clad counterparts, the mosquitoes have the blessings of local authorities, who are releasing the insects to help control their deadly cousins, known as Aedes aegypoti, according to the Monroe County Mosquito Control District. Aedes aegypoti are known to carry an assortment of potentially fatal diseases, such as Zika, dengue, chikungunya and yellow fever, experts say.

The government mosquitoes, named OX5034, have been genetically modified to produce female offspring that die in the larval stage, meaning only males will survive. Only females feed on blood, which is how they spread disease. However, not everyone is on board with the effort. Jaydee Hanson, policy director for a local safety group, calls the plan “a Jurassic Park experiment.”

Will producing genetically modified mosquitoes lead to something bigger? Should people be messing around with genes?